How Does FIR Heating Kill Germs? 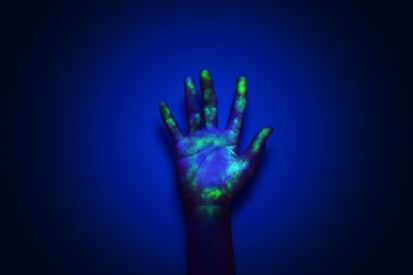 How does FIR heating kill germs and pathogens to create a sterile environment?

“A person’s mere presence in a room can add 37 million bacteria to the air every hour – material largely left behind by previous occupants and stirred up from the floor – according to new research by Yale University engineers.” (Yale University, 28/03/2012, accessed: 23/07/2021).

As a company, we have supplied Far Infrared heating for a few years and in that time we have overseen projects including NHS applications, medical practices, care homes and many others where a sterile environment must be maintained.

With convection heating, unless constant cleaning takes place, it is very difficult to maintain a high level of sterility. This is due to the fact that the air circulation caused by convection heating carries along any dust or germ particles with it. Convection heaters disrupt any settled dust on the floor and surfaces, circulating it throughout the room. In addition to this, the warm air temperature encourages the germs and bacteria to breed faster.

Far Infrared is known as a hygienic and sterile form of heating due to the fact it encourages no air circulation in order to heat a room. As the rays heat objects and surfaces, the air temperature raises as a by-product of this. Because of this, there is no air circulation in the room to carry particulates around. In addition to this, Far Infrared radiation is proven to kill germs and pathogens in the air.

Far Infrared is an invisible form of electromagnetic energy. As the wavelengths of rays are too long to be seen by the human eye in the form of light, the only way we can know it is present is in the gentle heat it creates.

Far Infrared has many proven benefits. These include encouraging blood circulation and the production of white blood cells which help to tackle illness and infections. In addition to this, it is also proven to eliminate damp and mould at the source and helps to prevent them from returning.

There are also historical examples of Far Infrared being utilised as a tool for tackling and eliminating disease. For example, diseases such as SARS or the Spanish Flu were proven to be negatively impacted by exposure to increased intensities of sunshine, which contains both FIR rays and UV.

It is because of these reasons that researchers have begun trialling the effects of Far Infrared radiation upon single stranded DNA viruses such as RNA viruses, which include the previously mentioned SARS and Spanish Flu. This group of viruses also includes different forms of Covid, including the Covid-19 virus.

So far in the testing, there have been positive signs that single strand DNA viruses are significantly weakened by exposure to Far Infrared rays, and there is reason to believe that with increased intensities and prolonged exposure the viruses can be killed off using the radiation.

In terms of germs, as Far Infrared rays warm surfaces rather than air temperature, it is thought that the germs simply overheat and are killed off in this way. Research done previously on the SARS virus shows that “heating and UV irradiation can efficiently eliminate the viral infectivity.”

Why Doesn’t It Harm Us?

Through numerous tests, past and present, it has been shown that double strand DNA such as human or animal remain stable under Far Infrared radiation, and double stranded airborne microorganisms can survive under mild radiation.

In fact, as previously stated, there are many health benefits to using Far Infrared heating. Besides encouraging blood flow and white blood cell production, it also helps to stabilise the metabolic rate of our bodies. In addition to this, as the rays only penetrate up to 4cm below the surface of the skin, they can assist in muscle regeneration, arthritis pain and body aches.

In addition to this, due to its effect on germs and pathogens, Far Infrared also promotes a healthy environment by keeping the air and surfaces microscopically clean of microorganisms. This means, that areas where Far Infrared is in operation are much easier to keep sterile, and it is much more difficult for germs and bacteria to spread.

Though scientists cannot yet determine whether Far Infrared radiation will be an integral tool to the battle against Covid-19, at the moment the initial tests are looking hopeful. Currently, there is scientific proof to suggest germs, bacteria and certain pathogens are significantly impacted or even killed by Far Infrared radiation.

So alongside being healthy for your body, you can be reassured that it will keep your home as safe too.