Blue Hydrogen – The Next Big Thing In Heating? 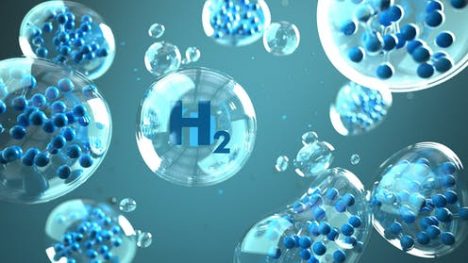 On 4th December 2020, Prime Minister Boris Johnson announced a new target for the UK’s emissions to have been reduced by 68% by the year 2030. The overall goal? For the UK to be at net zero carbon emissions by 2050 and leading the way in tackling climate change globally.  An ambitious target!

With this goal in mind, the Government have been backing all kinds of new technologies and deadlines with the aim of achieving these targets. Deadlines such as gas boilers no longer being installed into new build properties from 2025, and for all road cars to be electric from the year 2030.

In addition to this, new technologies such as Airsource heatpumps and Groundsource have been receiving a lot of attention due to the large subsidies the government are offering customers who install them. One new technology which has also recently caught the attention of MPs is ‘Blue Hydrogen’ boiler systems.

The Different Forms or “Colours” of Hydrogen:

Grey Hydrogen – Grey is the most common form, generated from natural gas such as methane and ethane. This is the fossil fuel known for powering most gas boilers and stoves. Scientists have identified this as an important source of carbon emissions which must be dealt with. The production emits CO₂ making this form unsuitable for the UK’s goal of net zero emissions.

Brown Hydrogen – Brown uses lignite or “brown coal” which is formed over millions of years of compressed peat deposits. Again, the process of extracting this form of hydrogen creates too much CO₂ for it to be a considered method.

Black Hydrogen – Black hydrogen is produced using bituminous coal – a tar-like substance. This form is the oldest way of producing hydrogen, known as Gasification. For Gasification to take place, the fossil based carbonaceous materials must be heated with a controlled amount of oxygen and/or steam to temperatures of more than 700 ͦc. The gas generated from this process is called Syngas and the hydrogen can be separated from the other elements using absorbers or special membranes. This process is highly polluting as both the CO₂ and Carbon Monoxide created cannot be recycled and so are released into the atmosphere.

Green Hydrogen – Green is produced by zero-carbon electricity which has been generated by wind turbine or solar panels. In this method, the hydrogen is split from water, separating the H₂O particles. This process is completely carbon-neutral but is expensive, and the cost to create the hydrogen in this way is not expected to reduce any time before 2030.

This leaves us with Blue Hydrogen which is becoming known as the “low-carbon fuel.” This is created through a process called reforming.

Reforming is a process where fossil fuels such as coal, oil or natural gas are combined with steam. These fuels are then heated to around 800°C and will then turn into Carbon Dioxide (CO₂) and Hydrogen. These two gases are then separated, with the CO₂ often being emitted into the atmosphere and adding to global warming. While the Hydrogen is used to power everything from car engines to boilers.

This is produced in the same way as the Grey, Brown, and Black variants, only the CO₂ created is captured and stored underground, being forced into rocks by a method called Carbon Capture and Storage (CCS). However, the equipment and solvents used for Carbon Capture and Storage is expensive, and this raises the price of Blue Hydrogen. Despite this, the UK, and US hope that it can be used as a low-carbon fuel at a lower cost than Green Hydrogen.

Although this all sounds great, there are some flaws.

The process of making blue hydrogen requires a lot of energy. Not every unit of heat in the natural gas that is used to be reformed into hydrogen makes it into the final product. Only 70-75% of that potential heat remains in the hydrogen at the end of the process. Putting it another way, if the hydrogen is used to heat a building, you would need to use 25% more natural gas to produce the hydrogen needed to achieve the same level of warmth than if you were to heat the building with the gas itself.

In addition to this, the US Environmental Protection Agency reported that methane, which is the main component and waste product of making blue hydrogen, is a far more potent pollutant than CO₂. In the time frame of a century, methane has the global warming potential of 28-30 times more than Carbon Dioxide. To put that into perspective, one molecule of methane in the atmosphere has the same effect as around 30 molecules of CO₂.

In order to find the gas in the first place to make the hydrogen, exploratory digs must take place. Fracking is needed to extract the gas and in doing so methane is released into the environment, and then the gas must be transported for the reforming process to take place.

Fracking is the process of drilling down into the earth before a high-pressure water mixture is directed at the rock to release the gas inside. It is heavily frowned upon and without rigorous safety regulations, it can poison groundwater, pollute surface water, impair wild landscapes, and threaten wildlife.

As an operation, the task of harvesting the natural gas is far too damaging to make this a considerable possibility.

Because of this, environmentalist organisations such as Climate Think Tank E3G, WWF and Greenpeace have been urging governments to drop all funding for blue hydrogen heating systems. These groups say that although blue hydrogen is better for the environment than natural gas, the process of making it eliminates it as an option for a zero-carbon Britain.

Following on from this, many environmentalists also don’t trust the Carbon Capture and Storage technology essential for the blue hydrogen production. For decades, this method has been touted as a planetary savior, but it has still not proven to capture enough carbon dioxide at a scale that proves it’s efficiency.

In fact, so much against the idea of the government implementing the Blue Hydrogen boilers as an option for heating UK homes, the Chair of UK Hydrogen and Fuel Cell Association (UK HFCA) has quit over the government’s support for the product. He described the technology as “an expensive distraction” which could ultimately serve to undermine the critical climate targets due to blue hydrogen’s dependency upon fossil fuels.

Scientists have also warned that it could not only boost emissions of greenhouse gases but also “lock in” the dependency upon fossil fuels.

The Hydrogen Taskforce wants hydrogen blended into the existing gas networks and for all boilers to be made “hydrogen-ready”. However, this all comes at a cost. A cost which the advisory Climate Change Committee has challenged as it projects only 11% of homes will actually run on a form of hydrogen, so why should all consumers have to stump up the cost?

Expected to be in the northeast of the UK, this minority of hydrogen heated homes will capitalise on the local wind energy industry which will be producing Green Hydrogen. So, though all homes are expected to be equipped with hydrogen-ready boilers, utilising Blue Hydrogen which will be pumped through the existing gas network, only 11% of those homes will be using a form of Hydrogen, and that form will be Green, not Blue!

In principle, the concept of Blue Hydrogen seems like it could be the next big thing in climate change prevention. However, when put into practice, it isn’t the saviour we need. If anything, is much more of a wolf in sheep’s clothing. This is due to the pollutant nature of the extraction and reforming processes.

If you are lucky enough to be located in the northeast of the UK, there is likely to be a brighter, greener heating future to look forward to. For everywhere else, it’s back to the drawing board… But Warm4Less can help!

Far Infrared heating is an eco-friendly, low consumption heating system. It is scientifically proven to have a range of health benefits for the human body. It is also extremely cost effective. Unlike the cost of turning your boiler “hydrogen-ready”, is much more economic to install. To find out how Far Infrared heating can be utilised to future-proof your property, please get in touch.